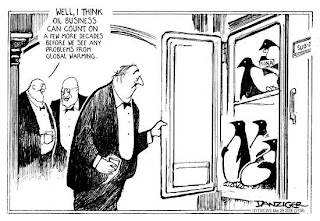 Take action to keep BP out of the tar sands – the single most destructive project on earth. The BP Fortnight of Shame is a call to action from the UK Tar Sands Network, Rising Tide and the Camp for Climate Action to force BP to reverse their crazy plans to move into Canada’s tar sands. It runs between the annual Fossil Fools day on April 1st, and BP’s Annual General Meeting on April 15th. We hope to send a loud message to BP to stay out of the Tar Sands. Grassroots groups across the UK and around the world, will be taking action in solidarity with First Nations communities in Canada to stop BP’s deadly plans in their tracks.
Why are Tar Sands such a problem?
Attempts to avert the planet from sliding into climate crisis are being threatened by a single massive project in the Canadian wilderness. Already, millions of barrels of tar sands oil are being extracted every day,producing three to five times as many greenhouse gas emissions as conventional oil. The extraction process is immensely resource-intensive,currently using enough natural gas every day to heat 3.2 million Canadian homes. Add to this the mass deforestation the projects are causing, ridding us of desperately needed carbon sinks, and it becomes clear this project cannot be allowed to continue if we are serious about preventing runaway climate change. The effects tar sands are having on local First Nations communities are devastating. The tar sands development in Alberta covers an area the size of England, with toxic tailing ponds so huge they are visible from space,leaking poisons into the local water supply. Not only are indigenous livelihoods and futures being destroyed, but communities on land where tar sands extraction has been imposed are experiencing disturbingly high rates of rare forms of cancer and auto-immune diseases.
Why target BP?
BP are the only major oil company with no tar sands extraction projects currently in operation. This is about to change. Since 2007, BP have quietly ditched the ‘Beyond Petroleum’ sham, because investing in renewables simply wasn’t making them enough profit. They have decided to go Back to Petroleum, with a vengeance, under the leadership of new Chief Executive Tony Hayward. Moving into tar sands was one of the first steps Tony Hayward took, acquiring a half share in the Sunrise Project with Husky Energy. The Sunrise Project will be huge, producing 200,000 barrels of filthy oil a day, and using Steam-Assisted Gravity Drainage (SAGD), an extraction process even more energy and water intensive than the more visible surface-mining operations.
The recession has given us a window of opportunity. BP have been forced to postpone their final decision on whether to go ahead until the second half of 2010. This means it is not too late for us to stop this outrageous project. BP are desperate for Sunrise to go ahead, and will certainly not go down without a fight, but with effective and sustained action we can win this one.
Read the full article here:  http://www.no-tar-sands.org/