YEP, IT IS THE SAME OLD NEW PLANS. 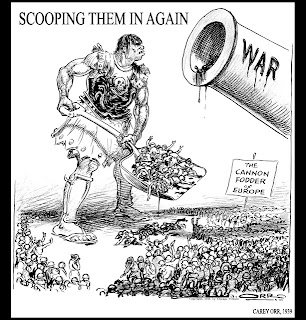 No matter how far we go back in our history it is the same old story, the working class being screwed by the rich and powerful and a state that is hell bent on war. Since the "peace" after world war 2, the British state has been fighting in almost every corner of the globe. There were the colonial wars as the "empire" struggled to be free of the British yoke. Then of course there was Egypt, Korea,the Balkans, Iraq and Afghanistan to mention a few. During all this time the ordinary people of this country have struggle for a decent standard of living and now stand on the brink of a return to the Victorian era poverty. It seems that we can't afford a decent standard of living for the people but we can afford to send our young people all over the world to kill other working class people. Surely we can come up with a better system than this, you know that this system is fashioned to suit the millionaire parasite class and you know that there are alternatives. Isn't about time that we asserted our selves and showed our real strength and ingenuity and fashion that new society to suit the needs of all our people and to hell with the millionaire parasite greedy power hungry war mongers.
The wee poem is from a previous attack on the working class and was written by one of Glasgow's own.
THE "FIND YOUR VOICE" RAP
"Do not despise the snake for having no horns for who is to say it will not become a dragon" (Ancient Chinese saying)
What do you say when you have no voice
what do you choose when you have little choice
When money talks and you've next to none
What do you say when the day is done.
Do millions have to demonstrate
against poor laws made by the state
for will they listen, will they hell
war propaganda is their main sell
What do you do when you are feeling low
thinking Bush and BLiar just have to go
Every four years there is a vote
The Party needs funds, will sell your coat?
What can you do when it is a crime
that it costs too much for TV time
Only the rich can air their views
to tell us lies and distort the news
So tell the aged, tell the youth
have the courage to tell the truth
Point out their every bluff
Shout it out "enough's enough"
By Paul Anderson 24 April 2004