The Police And Deaths.

Deaths after police contact is a subject that the media doesn't pay too much attention to, perhaps they don't want to spoil the illusion of the friendly cop on the beat. However those deaths are there and rising, which should be ringing alarm bells in the heads of the general public. Police custody deaths for 2017-2018 was the highest for a decade, a total 23 people died in or after police detention, an increase of 14 on the previous year.
Deborah Coles of Inquest stated that austerity was a factor in this increase, due to mental heath services being under funded and overwhelmed. A high proportion of those individuals who died after police contact had mental health issues, drug and/or alcohol problems.
Another disturbing fact regarding deaths after police contact is the disproportion of these are from ethnic minorities. A record number of black people died after use of force or restraint by officers. Last year the number of deaths after use of restraint or force also rose, 2016/17 of deaths from force or restraint, 5 out of 15 were from ethnic minorities, up from 3 out of 11 for 2015/16.
While death after contact with the police is not a rare event, a police officer being prosecuted is a very rare thing, to be found guilty is even more rare. It is almost 50 years since a police officer has been prosecuted regarding death in police custody, this despite innumerable unlawful killing verdicts and the fact that there have been more than 3,000 such deaths since 1969. Deaths in police custody and deaths from direct contact with the police, it doesn't seem to make much difference, if there ever is a prosecution we should expect a not guilty verdict to come up.
How far back do we go? Blair Peach 1979, killed by a baton blow to the head, Stephen Waldorf, 1983, shot by police officers, James Ashley, 1998, shot, Harry Stanley, 1999, shot, Jean Charles De Menezes, 2005, shot making his way to work, Abdul Kahar, 2006, shot, Mark Duggan, 2011, shot, and of course the 2009 assault and death of Ian Tomlinson. From that list, one prosecution and a not guilty verdict. 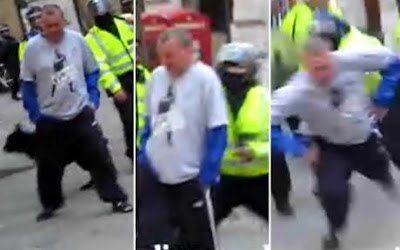 Death of Ian Tomlinson at the hands of the police.
Ian Tomlinson's death at the hands of a police officer must be the first where there was clear video evidence of the assault and dozens of eyewitnesses but that didn't make any difference, the verdict was still not guilty, later we get the full story, PC Harwood, it seems, had a record of violence with 10 formal complaints against him. Ten complaints, one videoed assault and death, one prosecution, one not guilty verdict. The British judicial system at work.
Of course the police are the police the world over, from recent figures it appears that in America, an African American dies in an extra-judicial police killing every 36 hours. Who are they protecting?
Posted by ann arky at 10:59