The Greek assasination from an eye witness, 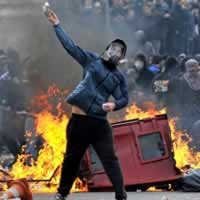 this story should be widely distributed ;

An Exarchia resident whose balcony overlooks the spot where Alexis Grigoropoulos was murdered.

I'm not so involved in any political activities. I'm not an activist. I can only speak about the killing. I can't take a position on all the other things that happened because all these other things are very complicated and I don't have clear thoughts on them.

Exarchia has always been an alternative, counterculture neighborhood. For many years it was a frequent occurrence that something would happen on a street corner in Exarchia and suddenly everyone from the cafes and the bars and the sidewalks would pour out into the streets and run to see what was happening. Usually it was incidents between people and police, some fights, confrontations, insults, shouting matches. In the old times it happened very often. Then there was a period when this didn't happen so much, but in the last years it has started becoming more common again.-----