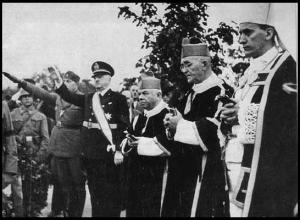 Over the last few days I have come to the conclusion that when the Pope visits this country nothing happens in the world. There is obviously nothing to report, nothing of importance being said or happening. Every newspaper you pick up has page after page of photos of faces and crowds, headline after headline of the same event. Interviews with the mesmerised members of the "flock" who all make meaningless statements which we have grown to expect from the followers of this mass hysteria.
All it shows is that the so called "newspapers" have nothing to do with news and all to do with propaganda. We are being drowned in a tsunami of irrational gibberish as if it was the accepted way of life of the people of this country. This is an organisation that is having trouble recruiting and swaths of those it has recruited are paedophiles and child abusers, only a very small number of the people of this country regularly enter the organisation's brain-washing units known as churches. It is a extremely wealth organisation that continually holds out the begging can, has repeatedly hidden abusers and silenced the abused. It preaches a dogma of repression against women and  gays, rants against the right of women to choose abortion and spouts the ridiculous rubbish that condoms spread aids.
In spite of all its cancerous preachings, our media give it all the propaganda that it wishes, our mouth-pieces of the state, the politicians, give it the stamp of legitimacy. Of course the two corrupt power-mongers are well matched.
As long as the church and/or the state hold sway, freedom will be an elusive prize.
ann arky's home.
Posted by ann arky at 10:40