Here we go with page 7 of the Teapot Collective Souvenir Introduction to Anarchy. You can find page 6 HERE.

In the Ukraine an area of 400sq miles was held for over a year as an autonomous region based on communes without government. One of the large uprisings against the dictatorship of the Bolsheviks was in 1921, when (really cool) Petrograd sailors and workers occupied the fortress of Kronstad. They were massacred by the Red Army, after which Trotsky boasted, "At last the Soviet Government, with an iron broom, has rid Russia of anarchism."
In the German Revolution of 1918, anarchist ideas were put into practise too, various council republics were formed, declaring themselves free from government. 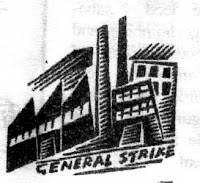 Probably the largest modern European example of anarchy in action was the Spanish revolution of 1936. Working class resistance to a fascist coup led to wide scale social revolution with millions of people organising their communities and workplaces on anarchist principles (the slowly spreading influence of anarchist ideas during the previous decades having convinced people this was possible) 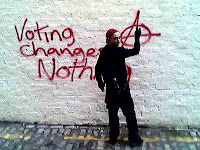