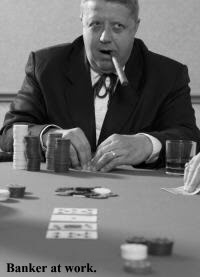 The monotonous call from the two well manicured public school boys and their cabal of millionaires in the cabinet, is “we must cut the national debt”. All their heated waffle is about where and by how much, nobody asks the WHY. The banks and the big financial institutions bet their lot on the roulette wheel of sub-prime mortgages and lost a packet. They turned to their bed partners, the governments and demanded that they make up the losses, with taxpayers money of course. The very obliging governments duly made good the bankers losses and lumbered us with this massive debt. Now those self same financial institutions, banks and bond holders, are concerned that the governments have too much debt and could default and if they default it is the banks and the bond holders that now stand to lose billions. As the can't ask the already bust nations to bail them out again, the only alternative is to get the mountain of debt down by hacking at the government expenditure. That means slashing public services, public sector salaries, destroying the health service, mutilating the education system and heaping thousands more onto the unemployment queue. So basically by sending the ordinary people back to the Victorian era of poverty and deprivation the banks and bond holders will be protected from making huge financial losses.
So there you have it, strip the public naked and save the billionaires from losing some of their loot. It's a good game if you can get away with it, and it is up to us to see if the do or don't. What do you think? Are we daft enough to let them get away with it, or do we still have some self respect left?
ann arky's home.
Posted by ann arky at 17:34