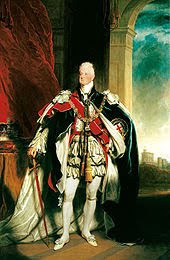 One of David Cameron's ancestors: King William IV (1765–1837), uncle of Queen Victoria
So we are all in this together!! Well from the back ground of our new Prime Minister it would seem that they are all one big family, but in no way related to you or I, or our world. He hails from that little bunch of privileged parasites that have held the reins of power for far too long, and no doubt will do all in his power to see that things stay that way. We can rest assured that he wont be upsetting any of his cousins etc.
"David Cameron is a direct descendant of George I, George II, George III, and King William IV (great × 5 grandfather) and his mistress Dorothea Jordan (and thus fifth cousin, twice removed of Queen Elizabeth II As an illegitimate descendant of William IV, Cameron is not in the line of succession to the British throne. He is the nephew of Sir William Dugdale, once the chairman of Aston Villa Football Club, and Birmingham-born documentary film-maker Joshua Dugdale is his cousin.[16] In May 2009, tabloid newspaper The Sun published a discovery by amateur genealogist Tony Andrews that Labour politician Harriet Harman is related to David Cameron through her aunt's marriage to his great uncle.
"http://en.wikipedia.org/wiki/David_Cameron#Background
ann arky's home.
Posted by ann arky at 12:11