It's common knowledge, or should be, that prisons are institutions of brutality, where violence is arbitrary, justice is varied on a whim, human rights are removed at the will of an individual, physical and psychological health is of little concern to the authorities, control and authority is all that matters. It is the control and authority of individuals who interpret these in their own manner according to their own particular mood or disposition. All this goes on in our towns and cities and we calmly go about our daily business.
Some prison have a more brutal reputation than others, but a recent report from America, puts Alabama prison system right there at the top of the festering heap of callous brutal savagery that stinks of psychopaths give free rein.
The Alabama Report: 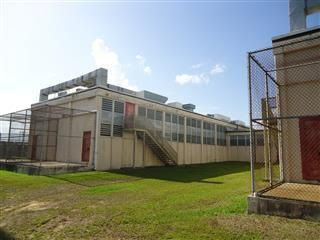 Alabama prisons have used ”cruel and unusual punishment” on inmates by allowing correctional officers to perform routine beatings, the Department of Justice (DOJ) said following an investigation.
“Our investigation found reasonable cause to believe that there is a pattern or practice of using excessive force against prisoners in Alabama’s prisons for men,” Assistant Attorney General Eric Dreiband for the department’s Civil Rights Division said.
An investigation of 13 Alabama prisons found that 12 of them had correctional officers using excessive, and sometimes deadly, force on inmates that violated their Constitutional rights.
Excessive force by corrections officers included the use of batons, chemical spray, and physical beatings involving kicking prisoners, which often resulted in serious injuries. Two Alabama prisoners died from excessive force incidents in the last months of 2019 alone.
In one fatal incident in October 2019, “the level of force used caused the prisoner to sustain multiple fractures to his skull, including near his nose, both eye sockets, left ear, left cheekbone, and the base of his skull, many of which caused extensive bleeding in multiple parts of his brain,” according to the DOJ.
The 28-page report released on Thursday highlighted multiple instances of officers using excessive force on inmates, with some of those times including when there was no physical threat to the employees' safety. The report also found officers would “use force as a form of retribution and for the sole purpose of inflicting pain".
One instance stated how an officer “brutally hit, kicked and struck a handcuffed prisoner” in a medical unit while calling himself the “reaper of death”. The prisoner reportedly “begged for the officer to kill him”, according to four nurses who witnessed the incident.
Low staffing and overcrowding in Alabama prisons was credited in the report as a trigger for officers to become “tired, stressed, overworked and angry”.
“After carefully reviewing the evidence, we conclude that there is reasonable cause to believe that conditions in Alabama’s prisons violate the Eighth Amendment to the Constitution and that these violations are pursuant to a pattern or practice of resistance to the full enjoyment of rights protected by the Eighth Amendment. Specifically, we have reasonable cause to believe that the correctional officers within the Alabama Department of Corrections (ADOC) frequently use excessive force on prisoners housed in Alabama’s prisons for men. Such violations are pursuant to a pattern or practice of resistance to the full enjoyment of rights secured by the Eighth Amendment,” the DOJ said Thursday in a letter to Alabama Governor Kay Ivey.
This report comes as the DOJ first started looking into the Alabama prison system starting in 2016. The department already found that the prison system was “deliberately indifferent” to prisoner-on-prisoner attacks on sexual abuse. Investigations also found officials failed to maintain facilities that were “sanitary, safe, or secure”.
“Ultimately, Alabama does not properly prevent and address unconstitutional uses of force in its prisons, fostering a culture where unlawful uses of force are common,” the most recent report stated.
Ms Ivey said in a statement that her administration was hopeful they could reach a resolution to all the department’s allegations.
“I am as committed as ever to improving prison safety through necessary infrastructure investment, increased correctional staffing, comprehensive mental-health care services, and effective rehabilitation programs, among other items,” the governor said.

So the governor said, and we heard Bla bla bla bla! Prisons must crumble to dust for freedom and justice to flower.