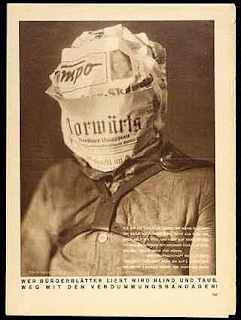 Some everyday headlines,
WE ARE SPREADING DEMOCRACY IN IRAQ.
AFGHANISTAN IS A WESTERN SUCCESS.
THE FREE MARKET SPREADS PROSPERITY.
THIS YEAR WE WILL TACKLE AFRICA'S POVERTY.

Who so ever reads the bourgeois press will become blind. Slowly the fog rises, lies build on lies, lies spawn lies, lies shape your vision and reality is lost in a false consciousness. Trivia and mediocrity fill the mind, seek reality outside the putrid puss and you are deemed to be mad, a raving lunatic, possessed. The media teaches us all we need know of scandal and sport, crime and sex, who slept with who and where, depicting life as a smutty peepshow. Through the bourgeois press you’re fed your daily dose of loathsome lies, banal boring bromide, cliched crap, trivia and petty pulp. Our leaders are portrayed as heroes, supermen, and so the lies breed lies, and lies stretch back into the distant past, lies distort history until it is lost in a bizarre deformed fabrication. We then repeat the disasters of yesterday because the lies are everywhere blinding us. We can’t relate to reality, reality always takes us by surprise because we have no grip of reality, only the lies.

"All this was inspired by the principle that in the big lie there is always a certain force of credibility; because the (public) more readily fall victims to the big lie than the small lie, since they themselves often tell small lies in little matters but would be ashamed to resort to large-scale falsehoods. It would never come into their heads to fabricate colossal untruths, and they would not believe that others could have the impudence to distort the truth so infamously. Even though the facts which prove this to be so may be brought clearly to their minds, they will still doubt and waver and will continue to think that there may be some other explanation."   Adolf Hitler.