A night at the movies.

Friends, activists, radicals, lend me your ears, or in this case your eyes and read this. Some excellent films coming up in Glasgow, how about;

3 short films on the Visteon, Prisme and Vestas workplace occupations.

600 ex-Ford workers at Visteon auto-parts factories are sacked with 6 minutes notice without redundancy pay. They respond by occupying their factories. After the factory occupations and the threat to picket out

workers at Ford's state of the art plant at Bridgend, Visteon and Ford were forced back to the negotiating table - where they conceded a redundancy package better than the Fords package the workers were demanding. It is the biggest redundancy package ever paid out by Ford anywhere! (25 mins.)

Another great response to the shutting down of a factory, as the cardbouard packaging workers refuse to leave and plan to reopen the factory as a workers cooperative. (6 mins)

An unprecedented red, green and black coalition support the Vestas workers occupying to stop the only wind turbine factory in England shutting down. (19 mins).

Followed by discussion on workplace struggles and how next year's cuts will affect workers.

Hosted by Clydeside Industrial Workers of the World, A Union For All workers

Simon Yuill's film "Given to the People" the story of

the "Pollok Free State" and "GalGael"

showing Friday 27th Novenmber 7:00pm in the Electron Club in

These film showings are FREE, a rare opportunity to look, listen,learn  and enjoy for free in this profit ridden consumerist society. 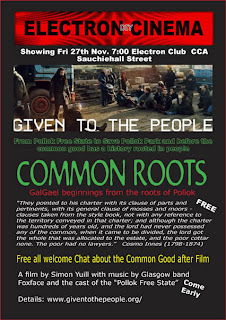 Then of course there is the Radical Independent Bookfair.

This ‘Book-fair’ has more in common with a wee bookshop than a large book festival. However there are four or five strands to each RiB... stuff for sale, things to swap, materials free to take away, library stock to view and events to engage in...
Glasgow's RADICAL INDEPENDENT BOOK-FAIR project:

Cathy McCormack
The Wee Yellow Butterfly is Cathy McCormack’s inspiring story of how, from unpromising beginnings, she has spent her life committed to seeking justice and finding fulfillment. This book is a grassroots analysis of the social, economic and psychological world war waged against the poor under Thatcher, New Labour and the American administrations. At the Sharp End of the Knife - a screening of the documentary film that Barbara Orton and Cathy McCormack made in 1999. “An 'eye-level' view as we go with Scottish activist Cathy McCormack into the township heartlands of South Africa to see how fellow activists are faring, in building the 'New' South Africa. She may be dodging bullets, but in the people she meets, finds energy and inspiration, making intriguing parallels with her own life in Easterhouse and theirs” As well as a relaunch of this book and a rare screening of this film there will be a discussion and public debate around the issues, hosted by Cathy.
Cathy McCormack poderuk@hotmail.com  http://www.argyllpublishing.com/

Note - this film and a selection of related films from Document 7 will be available at the RIB videotheque.
http://www.docfilmfest.org.uk/

SATURDAY 12th DEC stalls 10.00am - 7.00pm Refreshments 12.00pm onwards, BrothMix- Stone Soup.
An empty pot and a stone is the starter for this soup... it takes its form with whatever donations of vegetables, herbs, pulses and other foodstuffs are given to the pot. So look in the back of your cupboard for a lonely potato or lentil, dig up some winter veg or bring in some garnish and help feed everyone who is hungry! Home made breads and other baking will also be on offer.

Discussion 12.00 - 1.30pm May Day Open Discussion.
Reclaim the Day! What does May Day mean? What do we want it to be? How can we all work together? This forum isn't just hippy navel gazing; by planning ahead we can be more efficient, more effective (more mischievous?) So come along and let us know what you think, whether you're representing an affinity group or an army of one. Dissent isn't just encouraged, it's pretty much an assumed prerequisite, but hopefully we can all at least agree on a date.

Workshop / Discussion 1.30 - 2.30pm Gender 101.
A workshop/discussion on sex, gender and sexuality. As well as looking at the basics we'll be exploring radical trans/queer politics and the relationship between gender and class. We'll also be discussing these issues within the context of radical communities and how we can avoid reproducing systems of oppression. All welcome.

Forum 3.30 - 5.00pm Glasgow Anarchist Forum.
An opportunity for anarchists of all shades to meet, have a chat, see what others are up to and talk about projects and campaigns we'd like to work on. Ideal for those wanting to get involved in activism in Glasgow to find out what's going on and which groups are active.

Film Screening 7.00 - 9.00pm Zapatistas: Chronicle of a Rebellion.
This film has a history of its own. The documentary's first version, originally entitled La Guerra de Chiapas and released in late January 1994, was one of the first journalistic efforts to present and analyse the Zapatista uprising. Ten years later, in 2004, a second version was released. This third and updated edition includes images of the Zapatistas' most recent campaign, ‘la otra campaña’. It also investigates the role of the Zapatistas in the events surrounding the elections of 2006 and their involvement in the (brutally repressed) social movements in Atenco and Oaxaca. Furthermore, this new version documents the Mexican government's strategy of militarization, accelerated under the current presidency of Felipe Calderón, which is putting the Zapatista communities under increasing pressure.

FREE ENTRY.
Also for this end of year event we have chosen the RiB 'nimble nine' recommended reads / views / wears - all very recent or brand new stock...
FOR SALE.
...from No Sweat - FCUK Sweatshops - a new ethical threads T-shirt. http://www.nosweat.org.uk/

...from Rape Crisis Scotland - Woman to Woman, An Oral History of Rape Crisis in Scotland, 1976-1991 - An important document in the continuing fight against sexual violence today. With testimonials, research and information on various campaigns. http://www.rapecrisisscotland.org.uk/

...from AK Press - You Don't Play with Revolution - This book collects seven never-before-published lectures by Marxist cultural critic C.L.R. James, delivered during his stay in Montréal in 1967-1968. Ranging in topic from Marx and Lenin to Shakespeare and Rousseau to Caribbean history and the Haitian Revolution, these lectures demonstrate the staggering breadth and clarity of James’ knowledge and interest.
http://www.akuk.com/

FREE ITEMS.
...from the Association of Scottish Literary Studies - The First Men on Mercury - A graphic adaptation by Metaphrog of a poem by Edwin Morgan. As a way to interest children in poetry thousands of these have been distributed across all Glasgow Secondary Schools. We have got our grubby paws on a few hundred so help yourself! http://www.metaphrog.com/mercury

...from Glasgow Games monitor 2014 - The Eastend Eye - A new newsletter produced by a group of residents, activists and campaigners who are concerned about the effects of the regeneration in the East end of Glasgow through projects such as the Commonwealth Games and the Clyde Gateway Initiative.
http://gamesmonitor2014.wordpress.com/

...from the IWW - I don't want scabs touching my mail! - support your local posties with these striking wee stickers - current industrial action may be off, but the new winter of discontent is just starting.
http://www.iww.org.uk/

SWAP BOXES
...as well as hundreds of titles we will also have the most recent issues of Mute, Variant, Black Flag, Scottish Left Review, Burgh Angel, Resistance, Anarchist Critic and the brand new AK Distribution catalogue - perfect for browsing through in between RiB's...

This event will include the book launch of - The Rousing of the Scottish Working Class by Jim Young - first published in 1979 and is a story of the working class which resisted economic exploitation and cultural oppression, where industrialisation and subsequent elitist social authoritarianism, mass poverty and cultural imperialism. This new edition, published in 2009 by Clydeside Press, includes a new foreword by the author and 2 new chapters which update the original text.

RiB  "not by the book" http://www.ribproject.org/
The RiB is planned as a long term project to assist others through the ideas of mutual aid and solidarity - if you have materials you would like us to help you distribute and/or if you want to collaborate on an event with us and/or you have or know of a free (or cheap) venue we could use in the future and/or if you would be able to help us with general publicity - please do get in touch. We are always looking for new materials and if we are available are happy to do a stall at your next free event...