As the austerity plans of the financial Mafia bite ever deeper, so the repression comes on harder. The state will always see the population as something that has to be controlled and in the “good times” it is relatively easy as people would rather get on with their lives than than take to the streets to change things. However as living conditions begin to deteriorate and more and more people are beginning to hurt, so the control becomes more difficult, complaint turns to anger, anger turns to protest and if the controllers can't get the lid on it, protest turns to insurrection. We should have no illusions about the extent the state will go to keep the established order in place. No matter how much democracy they preach, if the people look like they are gaining in their desire to change things, then the kid gloves come off and the full force of the state's armoury comes into play. In this country we don't need to go too far back in our history to see the extent of force the state will use. 1911 the dockers strike, troops on the streets, and two protesters shot by the military in Liverpool, 1919, 40 hour strike, Glasgow, machine guns on the roofs around George Square, soldiers with fixed bayonets on the streets and at the docks, tanks stationed in warehouses in the East End of the city. In this so called democracy, the will of the people is the last thing the establishment will tolerate. 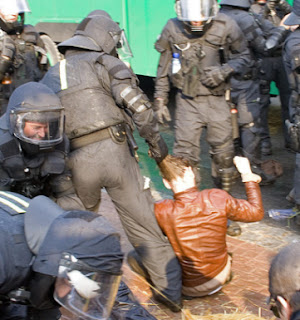 Today in Europe, Greece is at the forefront of the financial Mafia's plunder of public assets and as the anger of the people takes to the streets so the Greek police are given a free hand to brutally intimidate, repress and attempt to break the spirit of the Greek people. Our mainstream media seldom covers what is happening on the streets in Europe, we seldom see a mention of the police brutality in Greece, but it is there in force on a daily basis. The population of Greece is less than 11 million, approximately a sixth of the UK, yet in that country on average one person a week dies in Greek prisons or in a Greek police cell. The cold bloody shooting by a police officer of 15 year old Alexis Grigoropoulos to the weekly deaths in custody, is testimony to the brutality of the Greek state apparatus, we should never swallow the media crap that our police are somehow different, given the order the brutality level will rise.