A CRISIS IN CIVILISATION!!

We are all aware of the crime that is being perpetrated on the Greek people by the financial Mafia, we have seen the mass demonstrations and the riots, but what is not reported is the other ways in which the Greek people are tackling this onslaught of government arranged poverty and deprivation. There have been "Don't Pay" campaigns, looting supermarkets and distributing the food to the community, buildings being occupied and used for the benefit of the community. Other have decide to leave the cities and start there own sustainable community free from the capitalist mantra of money and profit.
This from the BBC News: 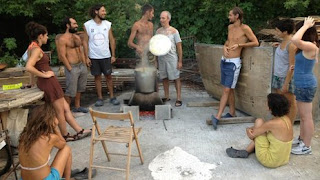 As Greece sinks ever deeper into the most severe economic depression in living memory, some young people are taking drastic action to change their lives.
In the spring of 2010, just as the Greek government was embarking on some of its harshest austerity measures, 29-year-old Apostolos Sianos packed in his well-paid job as a website designer, gave up his Athens apartment and walked away from modern civilisation. In the foothills of Mount Telaithrion on the Greek island of Evia, Mr Sianos and three other like-minded Athenians set up an eco-community. The idea was to live in an entirely sustainable way, free from the ties of money and cut off from the national electricity grid.

'Crisis of civilisation'
The group sleeps communally in yurts they have built themselves, they grow their own food and exchange the surplus in the nearest village for any necessities they cannot produce.
Continue reading the main story.