ARE YOU WHERE YOU SHOULD BE?? 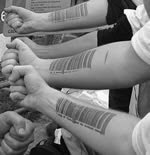 There has often been the statement made that we are "sleepwalking into a police state". For some time now I have said  that is not true, I believe we are already there, right in the heart of a very well developed police state. Where the state is always trying to increase its power of control and surveillance. Making sure you are where you are supposed to be, have you got permission to be where youy are have you permission to move to another spot, can you be observed as you move about your business? Is this the world you want? Is this the world you voted for?
This newsletter can be read online shortly at http://newsletters.mu.no2id.net/
+ DANGERS OF DATA RETENTION +
Anti-filesharing measures in the Digital Economy Bill currently before Parliament open a back door into your and your family's personal lives that *will* be exploited by the database state.Last year's public outcry against a Communications Data Database - intended to store details of your phone calls, e-mails and internet
browsing - forced the last Home Secretary to disavow plans for a giant surveillance database and to drop the proposed legislation. But things didn't end there.
The Data Retention (EC Directive) Regulations 2009 were still passed, requiring internet service providers (ISPs) and telecoms providers to retain communications data on all fixed and mobile phone, e-mail and internet usage for 12 months. Because this is linked to the details of the person subscribed to the service, the retained data, wherever it is held, forms a digital dossier on YOU... and your family.
Even national security is no excuse for blanket surveillance of everyone's communications, but the Digital Economy Bill would now make allegations of copyright infringement sufficient grounds for 'fishing expeditions' (speculative searches) in the data retained by ISPs - thereby ensuring the technology must be in place to enable mass surveillance by other agencies and organisations. With a new unit set up at the Home Office just last month to push forward the £2 billion 'Interception Modernisation Programme' (IMP), it isn't hard to imagine who else'll be snooping too.
Open Rights Group (http://www.openrightsgroup.org/) and others continue to campaign against measures in the Digital Economy Bill. They have various objections - but as NO2ID we have to be concerned about any pretext for mass surveillance without any form of warrant or oversight.
Interception of communications was historically so sensitive that it was made into a power exercised only on the approval of the Home Secretary that cannot be even mentioned in court. We fail to see why recording all your communications (and providing technical means for them to be arbitrarily investigated) is any different to opening your letters or secretly breaking into your home.
Please do write to your MP (http://www.writetothem.com/) in your own words, expressing your concerns.
ann arky's home. 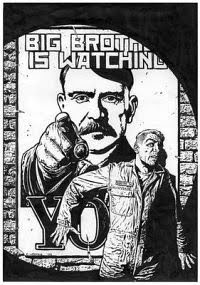