This little quote below from here    seems to be looking in the right direction on how to deal with the greed merchants that are responsible for the oncoming assault on the living conditions of the ordinary people. Alas, it is only a dream as this is corporate capitalism we live under and the big money boys call the shots.
"Here’s a more appropriate action: declare war on Goldman Sachs and other global financial firms that created this mess. Send the troops, the planes, the tanks, and the ships. Attack every outpost of the saboteurs on European soil. Blockade the airports and ports. Make Wall Street traders and CEOs fear for their lives, or at least for their freedom to travel. Build some Guantanamo-like facility to hold these enemy financial combatants until they can be tried, convicted, and properly punished.
Ok, if a literal armed attack on Goldman is too far-fetched, then go after the firm using the full force of the regulatory and legal systems. Close the offices and go through the files with a fine-tooth comb. Issue subpoenas to all non-clerical staff for court appearances. Make the internal emails public. Post the names of all managers and traders on Interpol. Arrest anyone who tries to board a plane, train, or boat; confiscate their passports; revoke their visas and work permits; and put a hold on their bank accounts until culpability can be assessed. Make life at least as miserable for them as it now is for Europe’s tens of millions of unemployed workers."
However, the misery to be heaped on the ordinary people is real, the anger of the ordinary people is real, so perhaps that misery and anger will find a vent and blow this lousy unjust system clean out of the water. 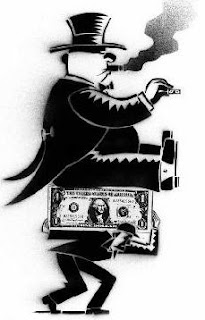