Today, Glasgow should come together to clean its streets, today the nazi SDL want to turn our streets into avenues of hate. This off-shoot of the EDL/BNP nazi groupings are not welcome on the streets of our city, a city that has a long tradition of stuggling for the betterment of all its people, a city with a proud history of working class unity. We can't allow this band of deranged dangerous nazi nutters to soil that history. 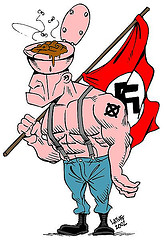 
See you on Saturday.


------------------------------------------------------------------------
Unite Against Fascism (UAF) is a national campaign with the aim of alerting British society to the rising threat of the extreme right, in particular the British National Party (BNP), Britain First and the British Freedom Party gaining an electoral foothold in this country. We aim to unite the broadest possible spectrum of society to counter this threat. UAF is backed by every national trade union, includes members of political parties, anti-racist campaigns, faith organisations, and a variety of individuals in between. We have no affiliations to any political party.
The fight against fascism doesn’t stop once we chase the SDL out of our city.
We urge you to join UAF and help us fight that fight until the fascists are defeated.
For more info and to get involved:
web ~ www.uaf.org.uk
email ~ uafscotland@gmail.com
Facebook: UAF Scotland