The Glasgow 1915 rent strike was a tremendous victory for working class solidarity. It forced the government to bring in the rent restriction act, freezing all rents in the UK until six months after the war. Only by their determined and heroic stand was this achieved. It wasn't compassion from the landlords, it wasn't concern for the welfare of the people by the government, it was co-operation and solidarity between the local women of the districts of Clydeside, and the men in the shipyards and factories that brought this struggle to an historic victory. 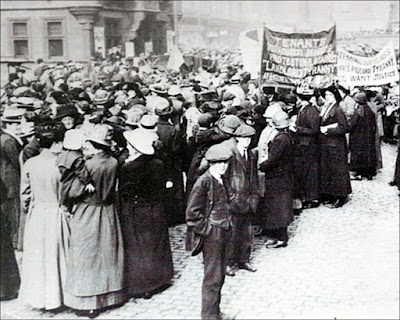 A date for your diary to mark this wonderful victory and display of solidarity and determination. Organised by the Scottish Peace Network, and Clydeside branch of the Industrial Workers of The World.
In conjunction with this event, Spirit of Revolt is holding an exhibition In the Mitchell Library foyer, From November 2nd. to November 28th. The main theme of which will be the Rent Strike, 100 years on. There will also be a tribute to Joe Hill, marking the centenary of his murder by the US state, along side a display on the Peace Movement.
Two events not to be missed.


Tuesday, 17 November
Walk of Pride, starting 12 pm, Dewar's statue, proceeding to the City Chambers
A tribute to radical Glasgow on the 100th anniversary of the rent strikes and mass march of 1915.
To honour the tens of thousands of Clydeside women and shipyard workers who united to defeat the rent rises; and to affirm the rent strike as a tool of struggle throughout the world.
In conjunction with Spirit of Revolt's November archival exhibition at the Mitchell Library, The Glasgow Rent Strike:100 Years On; the Scottish Peace Network's Counter-Centenary Project; and the ongoing work of the Clydeside Branch of the Industrial Workers of the World