ENJOY THE ECSTASY OF YOUR RIGHTEOUS ANGER.

Thanks to the efforts of angry citizens this was Gordon Street branch of Bank of Scotland on the busiest day of the week. Hit them where it hurts, their profits. 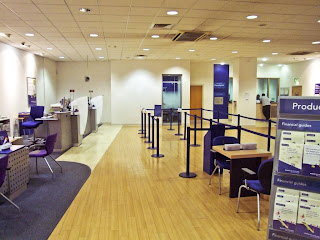 People across the country are pissed-off and the anger is beginning to show. That great slumbering beast, the British working class is starting to rise, the recent set of “austerity cuts” (attack on living standards) has stirred it back to life. Across the country ordinary people have been showing their anger by occupying branches of some of the biggest players in the banking casino. Here in Glasgow we have seen a large city centre branch of Lloyds TSB occupied and closed, Gordon Street, Bank of Scotland occupied and closed, twice. The people are aware that it is not just the rip-off banking casinos that are responsible for all the misery about to be thrown at the public. The other players in this fiddle of public assets are the big corporate companies with their tax fiddling. So the public have seen fit to occupy and close the Vodafone flagship shop in Buchanan Street on the busiest day of the week. Why Vodafone? Well it is just one of the many companies that have fiddled the British tax payer by not paying their fair share of tax. In the case of Vodafone, it is a little matter of £6.1 billion. How many affordable houses would that build, how many teachers would that pay for, how many schools could that build?
We have to keep the momentum going and increase the number and frequency of the occupying, picketing and closing down of these banking casinos and corporate highway robbers. Spread the word, speak to those involved, organise in your own area, local branches, city centre branches, banking casinos and corporate rip-off merchants offices. Let's let them know that we are going to fight back and fight hard, we will change society for the benefit of all our people, we will put people before profit, we will take control of and shape our society.
More info at; http://www.ukuncut.org.uk/    and; http://www.indymediascotland.org/