MONEY FROM NOTHING, OR PHONEY WEALTH!!! 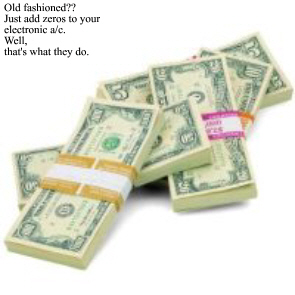 The following is an extract from a much longer and very informative article which can be read HERE.
Amazing, in today's world you can create wealth by just adding a couple of zeros at the end of a reserve account, no need to go to the printers and waste all that paper.
4. Quantitative easing -- dirty deeds done dirt cheap.
The long decline of the US dollar documented earlier -- a decline that is ongoing -- is one reflection of the growing relative weakness of the US in the context of the world economy as a whole. This growing weakness was revealed by the harsh impact of the most recent recession on the US economy, one felt much more strongly there than in the other major economies. In the face of this deepest recession in a generation, the fourth and final aspect of US-based currency wars came to the fore. It is without doubt the strangest of any that we have looked at, not the least because of its mysterious name, "quantitative easing".
There are several ways of defining Quantitative Easing. According to the Central Bank of the United Kingdom, it is a way of injecting money into the economy "by purchasing financial assets from the private sector". How are these assets paid for? Why "with new central bank money". But where does that money come from? Well, "the Bank can create new money electronically by increasing the balance on a reserve account".[20] And that's it. New money is just simply created. If your balance is $1000, add a "zero" and it's $10,000, new money created "electronically by increasing the balance on a reserve account". Quantitative easing's "effect is the same as printing money in vast quantities, but without ever turning on the printing presses."[21] A skeptic would argue that the obscure term "quantitative easing" was chosen as less likely to arouse suspicion than a more transparent name such as "Harry Potter money creation".
When this was policy in Japan in the wake of the deep recession of the early 1990s, it was derided in the US press as something "which essentially stuffed Japanese banks with cash to help them write off huge bad loans accumulated during the 1990s".[22] But since 2008, this policy of creating money from nothing has been embraced with passion in the United States. In 2008, the US central bank (the Federal Reserve) "bought $1.7 trillion worth of Treasury and mortgage bonds with newly created money".[23] That $1.7 trillion did not exist. It was brought into existence electronically and transferred to the books of financial institutions in the hopes of pushing that newly minted money into the economy and stimulating growth. That program is now over. There is, however, every prospect that another round of quantitative easing will be announced in the coming weeks, with anywhere from $1 trillion to $2 trillion being created electronically to "stuff US banks with cash to help them write off huge bad loans" accumulated in the last 10 years, to paraphrase the sarcastic analysis of Japan's similar policies.