THE PEOPLE STRIKE BACK!!! 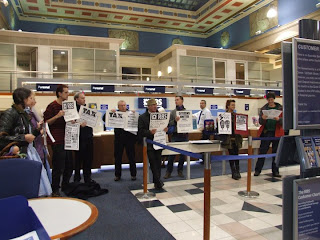 The people strike back: http://www.indymediascotland.org/node/22138

More and more we are seeing people from all across the political spectrum taking direct action against the gambling casinos they call the financial sector and the tax dodgers of the corporate world. People are beginning to show their anger at the gamblers blowing their lot in the casinos of the financial world, then coming with the begging bowl and being given billions of tax payers money only to pay themselves massive bonuses and run straight back to the casino. At the same time telling us we have run up too much debt because of the money we have loaned them, so we will have to decimate our welfare services to save the bond markets losing some of their money.
Do we have to put up with Vodafone's £6 billion tax fiddle and the new boss of Lloyd's getting a £7 million pay package, while we are told to tighten out belts and head to the nearest charity to get help for our kids? The list of tax evaders, (dodgers) is so common place that they are quite blatant about it all. It ranges from Vodafone to Google, to Murdoch's News Corporation, from Ashcroft to Green, billions of what should be tax paid to society is siphoned off into private coffers or poured back in to their business to increase bonuses to shareholders.
Recently we have seen banks being occupied and picketed along with Vodafone, this justified action is simple to organise and effectively hits them in the pocket as well as showing other people that there is a way to get back at the greed machine that is set to shred our standard of living. Watch for what is going on in your area and join them, those involved are ordinary people, working, unemployed, pensioners. After all it is the ordinary people that are being squeezed but we don't have to take it lying down. 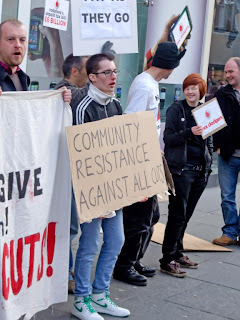