A Society Of Lies, More Lies, And Damned Lies.

Most informed people in this society know it is a society of lies, more lies, and damned lies. That's how the system works, sleight of hand, fiddled figures, smoke and mirrors and wild propaganda. If the truth were told, the whole pack of cards would come crumbling down, people just would not accept the fact that  all the wealth we produce is shovelled into the coffers of the corporations and their merry band of pampered parasitic managers.
There are those who say the system is broken, far from it, it is doing what it is meant to do, syphon wealth upwards. One reason this robbing, plundering system survives, is the fact that the majority seem to accept the illusion that it can do the opposite. 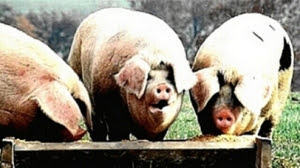 Our Lords And Masters. (apologies to the hogs)
This from The Void:

The body established to lie on behalf of the fraud ridden welfare-to-work industry have launched a new campaign on the back of a report so breath-takingly dishonest it would make Iain Duncan Smith blush.
According to the Employment Related Services Association (ERSA), the floundering Work Programme has been a huge success and is set to add £18 billion to the economy.  This is based on a report which ERSA commisioned from a consultancy company called Europe Economics who have mangled the figures in an attempt to hoodwink the DWP into giving Work Programme providers like A4e and G4S even more tax payer’s cash.