WE ASSIST IN BOMBING GAZA.

On 14 November 2012, the Israeli army began attacking Gaza with drones, Apache helicopters, F-16 fighter jets and naval vessels. For 8 days, civilian areas of Gaza were bombarded by Israel from air and sea with over 150 men, women and children losing their lives. 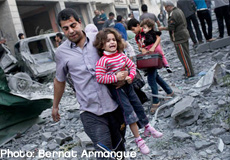 Tell the British government to stop funding Israel's brutal attacks on innocent people.
This attack was only made possible through the continued financial, military and diplomatic support Israel receives from Western states - including the British government. Take action to help end this suffering for good.
By selling arms to Israel, the British government is giving direct material support for Israel's aggression against the Palestinian people and sending a clear message of approval for its actions.
Call on Foreign Secretary William Hague to introduce an immediate arms embargo on Israel until it ends its violations of international law.
Thanks you for taking action.
Posted by ann arky at 09:40