The Kilt And The Black Flag.

With Scottish independence on the agenda it is good to hear the various points of view being put forward. I for one have never quite got my head round "what is a nation". Having been born in "Scotland" and lived there for most of my life I have often wrestled with the question, "what is Scottish", after all the border between Scotland and England has moved several times in history. It is a geographical location where at least three languages have struggled for survival, and with languages comes as many cultures. As a citizen of Glasgow, a post industrial city, I feel I have more in common with the people of Liverpool than I have with the people of the highlands and islands. I am also loathed to get involved in a debate between the various party political clans as how best to carve up a capitalist entity, so that, that capitalist entity can best serve a particular section of the population. I would rather debate how do we get rid of that capitalist entity and best serve the interest of the people. To me, nationalism and capitalism belong in the same bed, and it is a bed soaked in the blood of the ordinary people. Would it not be better if the debate was about what is happening in Greece, Spain, Italy, Portugal, Cyprus, Ireland, Turkey, Afghanistan, Libya, Iraq, Syria, Iran, and find the connection to what is happening here?
To add to the debate here is an extract from an interesting article in The Commune: 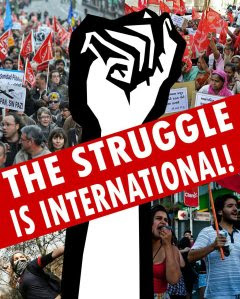 "--------In Britain today, the mainstream socialist left, in defiance of history,  still regards internationalism as abstract propaganda and is campaigning for a yes vote for Scottish nationalism and independence for Scotland, which is not an oppressed nation.  In a globally integrated world economy, dominated by transnational corporations and world financial organisations, such as the International Monetary Fund, the entire question of national independence becomes hollowed out as in Greece.  And how can the creation of another capitalist state, based on cutting business rates and corporation tax,  and other measures to attract capitalist investment,  benefit the working class ?  Loyalty to a new Capitalist State would renew nationalism and class collaboration and blunt any class struggle for a post Capitalist alternative.
Independence lite, the programme of the SNP, sharing the Bank of England, the army, the Monarchy  and a currency will not represent the break up of the British State.   But the left in Scotland is putting its hopes on steering the state left .  The Radical Independence Campaign is  ”a coalition that does not even pretend to be based on the goal of Socialism.  Indeed, this emerging coalition is very much in the tradition of welfare provision in Scotland and England for a century ”  (18)  Nationalism given a Social Democratic gloss to attract the working class.  ”The only way in which the grip of a capitalist world system on individual countries, can be broken, is that if the system itself is destroyed. And no national struggle can achieve this, only the international working class” (19) Working class self emancipation from below  cannot be built on a nation, utilize the nation-state, or be confined to the nation-state.