Please Sir, Can I Have Some More?

I have always held the view that the EU would not tolerate any deviation from its financial masters' "austerity" plan. Since they don't really give a shit about the people of any particular country, they are quite prepared to see a people slide into total deprivation, as long as it protects their mountain of phoney money. People don't matter when you are dealing with balance sheets. For Greece to go to them to negotiate and talk about a humanitarian crisis, is simply to confuse the issue by talking a different language. All they would say to that is "what humanitarian crisis"? 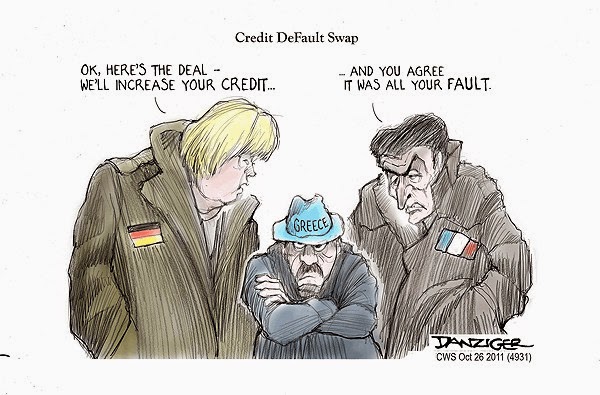 It has never been a negotiation on equal terms, Greece is the Oliver in this macabre play, they are simply going to the fat cats and asking for more please, under the illusion that people matter in these affairs. If you play the game according to the rules laid down by your adversaries, you are onto a looser.
Where does this leave Greece? It leaves it still on a hiding to more austerity and deprivation. Time keeps rolling on, we have been treated to seven years of austerity, and more promised, nobody has said when it will all come good. Austerity is the new way of life, the longer it goes on, and they get away with it, the longer it will go on. Of course we are treated to phoney rhetoric of recovery is arriving at platform one SOON. 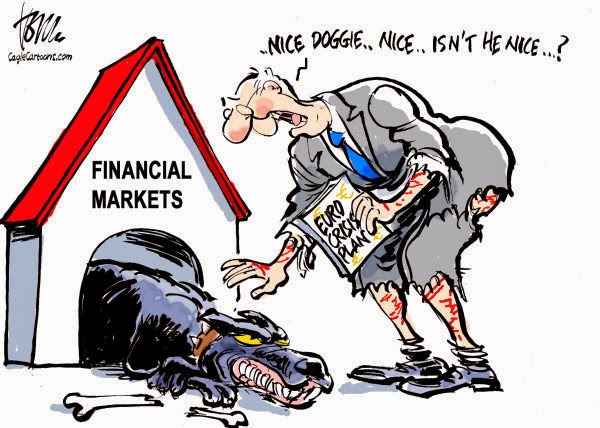 Accept it, the grand plan is for a low wage economy throughout Europe, creating a sweatshop to compete with the Eastern sweatshops. In doing so protecting the loot of the Western financial Mafia. Unless of course, we all wake up and say we don't need to take this shit from a bunch of useless parasites, we don't have to play the game to their rules. Just as they change the rules to suit themselves, then so should we. Their grand plans are not to our advantage, nor are they set in tablets of stone.
An analysis on the latest Greek situation from Lenin's Tomb.

The problem with Tsipras's speech goes further than this, however.  Not only is it deluded.  It recalibrates the government's language and goals in order to rationalise not just this thrashing but future routs.  Having said that austerity and the Memorandum are now left behind by this deal, the government shifts the goalposts and terms of future negotiations.

And this is part of the reason why those who speak of 'buying time' are wrong.  Time is not a simple quantity that only one side gains from. The EU ruling classes have also 'bought time' and they have the resources and are on the offensive, while Syriza has retreated.  There are no grounds for thinking that Syriza's bargaining position will be better in four months time than it is now.  It has already weakened its stance, while its political position, after four months of continued austerity, will probably be worse.

One can hardly pin most of the blame for this on Syriza.  They are in a weak position, and it is doubtful that any government could have obtained better against an EU determined to humiliate Greece.  Yet, the line of Tsipras and Varoufakis is simply untenable.  Their commitment to trying to resolve this crisis within the terms of the euro must fail.  They were simply wrong to think that they would have a single ally or interlocutor in the EU.  The southern European governments are even more fanatical than Berlin on this question.  Hollande, far from being a friendly face, told Syriza to shove it fairly early on: he made his decision on austerity some time ago.