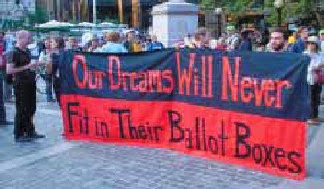 This Crooks and Liars competition, (the general election) has seen Class War put up candidates, and there has been much criticism from certain anarchist quarters. I personally see nothing wrong in useing every means available to raise the awareness that we are in fact in a class war situation. There is no doubt from Class War's stance, that even if elected, a very big if, they would not be taking part in the charade that takes place in the Westminster Houses of Hypocrisy and Corruption. They make it quite clear that this in no more than a propaganda event to help to bring the words, class war and anarchism to the fore of people's minds. I see it as a wonderful propaganda stunt and poking ridicule at the ridiculous. The same principles still apply, our dreams will never fit in their ballot boxes. 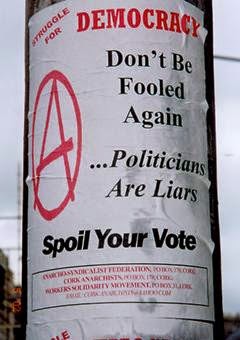 Ian Bone can probably explain it better himself:


Heckling at elections is more difficult now. Politicians are kept away from human contact by an army of minders determined to prevent any embarrassment and stick to the soundbite agenda with a slogan that will be pumped throughout the day. Paradoxically though – the harder it is to intrude into the election circus the more seismic is the effect when it does happen. Think Gordon Brown’s ‘that awful woman’ or the rictus look of terror on the politician’s face when confronted by a lone individual in front of the cameras. These lone individuals are modern propagandists by the deed – much feared and liable to blow the election apart with a few dogged words.
A few of us in Class War have been heckling politicians on St. Stephens Green on important parliamentary days when the media set up camp. There, in front of you, are your enemies. You can be political or puerile: “I thought you were dead” has been said to David Steele, and the very wonderful “You made Peter Andre cry” to Kay Burley when interviewing Alastair Darling. We lamented in the pub afterwards that such occasions weren’t more frequent.
But they are at election time, and to give it a national focus rather than a series of chance heckles we decided to stand candidates. By any means necessary means by any means necessary – not by any means necessary apart from voting.----------